Although Josh Batson did not begin his career with neurology in mind, there is now nowhere else he could imagine himself being. “My journey in neurology began five years ago,” Batson said. “A local neurologist took a chance on a new grad nurse practitioner and I took a
chance on the field of neurology.”

Batson’s original interest lie in the cardiac unit as he worked in the CICU at South Georgia Medical Center as a registered nurse. He envisioned a future as a nurse practitioner in cardiology. However, when a local neurology opportunity crossed his path, he decided to give it a shot.

“I thought there is nothing open right now with the cardiology groups, so I could just do neurology for a year and get some experience as a NP, then go back to cardiology after that,” Batson said. “Needless to say, five years later, I am still in neurology and couldn’t imagine doing anything else. It’s my calling.”

While the venture into neurology may only be five years old, his history with migraines goes back to childhood with his brother, sister and himself all being migraine sufferers.

“My brother had the worst case of the three of us,” Batson said. “I can remember him missing school during a bad attack. I though migraines were just a part of life until I grew older and realized not everybody gets migraines.”

Batson went on to marry his wife who is also a chronic migraine sufferer and watched through the years as she suffered severe attacks. “I’ve been in the ER with her and I’ve seen first hand how an ER treats someone with a migraine attack,” Batson said. As Batson states, in his opinion, the ER tended to treat migraines as a non-emergency condition, leading patients to endure lengthy wait times and he witnessed some staff treating migraine patients as mere
“drug seekers.” On top of that, he felt the ER was able to do little to help actually break a migraine. “Each time, my wife and I left the ER, she wasn’t any better than when we got there,” Batson said.

Batson’s training in neurology taught him how to abort active migraines through a series of nerve blocks and he began accepting patients who would call in requesting treatment for active migraines as acute visits during normal office hours at his current job at Southern Healthcare Alliance – Neurology.
“This was great for our patients and during normal hours,” Batson said.

“The idea of The Migraine and Spine Clinic was born one typical Monday after a patient I was seeing complained of suffering a bad migraine over the weekend.” Since weekends were not included in normal business hours, patients had no options and Batson began hearing this same story many
Mondays and the idea began to grow from there. “Not only did I need to create a weekend option, but an option for people that were not our patients already,” Batson said. “Another common neurology condition I saw was spine pain, specifically neck and back pain. I knew how to treat acute flare ups of those conditions as well, and those patients are treated similarly to migraines by the ER.”

The Migraine and Spine Clinic of Valdosta observed its two-year anniversary the first week of June and has three staff members and two nurse practitioners, Justin Haskin, NP-C, and James Garrett, NP-C. The clinic is the only urgent-care walk-in that specializes in treating active headaches, neck and back pain, which helps funnel non-emergency patients away from the ER, Batson said. The Migraine and Spine Clinic of Valdosta provides specialized nerve blocks, trigger points and steroid injections to decrease active head, neck and back pain.

“Our typical patient is in and out in less than a hour and with a 75 percent or greater reduction in their pain level,” Batson said. “Our treatments do not include opioids or anything else that would prevent a patient from going back to work, school, being a mom or dad or whatever they were doing before their
problem started.”

Migraines: The sufferer & the family

Living with Back Pain: Sciatica Shock 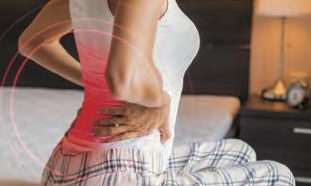